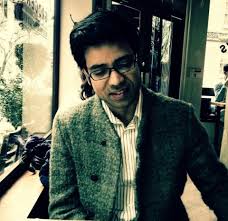 Raj Chakrapani grew up on American breakfast cereal and balavihar. He studied Indian Classical Violin and worked as a journalist before joining Peace Corps where he served in Romania and Liberia. As a teacher for the U.S. Embassy in Yangon, Myanmar he started writing poetry inspired by the political consciousness and distinguished history of Burmese poetry. He was a semi finalist in the Beechers Poetry Prize and his poems are forthcoming in the Des Moines Register. He is a recent graduate of the Iowa Writers’ Workshop.

All Together, a documentary by Andra Rotaru and Raj Chakrapani,

The INTERNATIONAL WRITING PROGRAM (IWP) began in 1967 as a way to bring together a wide range of international writers to examine current trends in world literature. Nearly 50 years later, the IWP’s Fall Residency is the oldest and largest multinational residency in the world, having hosted over 1400 writers from more than 130 nations at the University of Iowa—a major American research institution internationally renowned for its writing programs—and Iowa City, in part because of the IWP’s presence, has been designated a UNESCO City of Literature.

For 2014, the IWP brought together 29 of the world’s emerging and established writers to participate in the Fall Residency’s unique inter-cultural experience. Over the course of 10 weeks, aside from working on their own projects, writers gave readings and lectures that shared their work and cultures.
The writers collaborated with artists from other genres and art forms, and traveled around the United States to interact with American audiences and literary communities. “All Together” is a documentary made by Andra Rotaru in collaboration with Raj Chakrapani, as part of the 2nd Annual Outreach Fellowship, an additional fellowship of IWP, focused on cultivating public outreach and artistic collaborations.

This documentary contains a multitude of perspectives as the footage is a collaborative work of writers from the International Writing Program’s 2014 Fall Residency and of people from Iowa City. The filming of “All Together” was intentionally shot on a variety of cameras using “found” music and performances from the IWP group of writers, highlighting their artistic diversity and collaborations in both their official readings and spare time. Writers were filmed reading in different literary spaces: Prairie Lights (Iowa City, IA), Shambaugh House (IowaCity, IA), Poets House (New York, NY).

They were also filmed in collaborative events like “Global Express” and at local venues like a rodeo, Wilson’s Orchard and musical/performative parties. For the documentary there were also used interviews with writers in the MFA program at the University of Iowa and interviews with IWP staff.

The funding was provided by the IWP and by the Bureau of Educational and Cultal Affairs at the U.S. Department of State.