Franca Treur (fiction writer; Netherlands) won the 2010 Selexyz Debut Prize for her novel Dorsvloer vol confetti [Confetti on the Threshing Floor], which was released as a feature-length film in 2014. Her second novel, De woongroep [The Roommates], came out in early 2014. She contributes stories, columns and essays to NRC Handelsblad, Volkskrant, Groene Amsterdammer, radio 1 VPRO Nooit meer slapen and Vogue. She received many fellowships, among them in The International Writing Program, 2014. 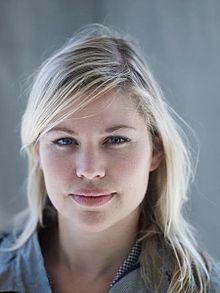 Did I even ask you? Huh? Did I in any way imply that I was looking for a man? If I’d have wanted a guy, I would have put a sign up on my island: ‘Wanted, man’.
Do you still remember what you said the night when you washed up? Yeah, washed up on the shore. You crawled up on land like a spider out of a tub of dishwater. You had barely saved your ass, and a few hours later, you were already babbling on, about whatever.
Remember what you said?
That every woman, deep inside, is looking for a man to protect her.
Sure, I get it. You needed this attitude.

Just let it go, I thought. I know how hard it is for men if they aren’t taken seriously. Yeah, let me finish. Now nothing really matters anymore.

Sometimes, you know, sometimes I suspect that deep inside, you still believe in that ‘protection’ stuff. That definitely comes from prehistoric thinking, when men still went hunting.
Yeah? The nail on the head?
Doesn’t surprise me at all that you still believe in that fairytale. From the start you didn’t seem like someone who ever read a book.
Well, I tell you, hunters have gone out of fashion, to say the least.
What?
You’re going to write a book? How many times have I heard that before? I now know more people who are writing a book than those who are reading one.
But, um, you wanted to protect me. Interesting. And against what, again?
What did you say?
Enemies?
You know what I do, when I feel funny with people? I invite them to my house for a drink.
Grab a chair, I say. What are we drinking—red or white? I recommend the white. That’s a wine you really can’t resist. It has tones of barley flour and golden honey. Well, they always want white.
Add a tiny bit of seasoning…
And a soft tap with my magic wand. (Tap, and voila!)… I have another new pet! A lion that does nothing, except eat straw like an ox, or a Komodo dragon—yup, I made one of those too—and that lazy polar bear over there is from a year or two back.

I know. With you that wouldn’t work. Your friends, though, I turned them into bristly swine. That’s the first thing I had in mind when I saw them. They were so filthy. Swine material, I thought.

And then you came along.
In all honesty I had a swine in mind for you too. You didn’t smell too fresh. But then you had those anti-sorcery herbs with you. Moly. That’s what it’s called, right? Yeah, that’s what you called it. Holy moly.

You had never lain in the bed of a goddess before.
That’s all good and well, I said, but first—in the bath with you.
In the meantime, I let my servants smell my sheets. They were still fresh enough.

You walked over to compliment my bed. It is a good bed. And we got in.
I normally don’t do this, you said afterward.
What do you mean? I asked. You didn’t give the impression that you were still a virgin—?
With another woman, you said.
You’re married? I asked. Now you’re telling me!
You saw that I wanted to get up, and you wouldn’t let me. You said you enjoyed my bed. That you felt good. That you liked me.

And I, I looked at how your curls fell upon the pillow, still a bit damp. Deep, dark brown curls.
No, you weren’t the type to cheat, but then suddenly there were stories about a “vaulted cave” of a certain Calypso…
I said nothing.
I’m not one to judge.
I began to fall in love. You too. Or at least, that was the impression I got.
Surely, one cannot be certain of such a thing.
You asked if I had a boyfriend. I said, “no, no boyfriend.” You were pleased to hear that.

I pulled gently on your enchanting curls. I was in love with how they adorned your neck.
You said you loved me.
Yeah, you really said that!
You had never experienced this; the feeling that you had with me, you had never had before.
I believed it.
It wasn’t only the sex, you said, and you mentioned things about my character that you also liked. You said I had a strong personality. Didn’t you say I had heart?
I am sweet, you said. We were soul mates.
Oh, how we could laugh together!

You told me stories. You weren’t just anyone. I admired your adventures, the bravado with which you made decisions. Because of you, at the last minute everything ended well.
You could have been a bit more self-depreciating. You took yourself so seriously.
But I listened happily. I could tell that you hadn’t ever before, experienced such devoted audience.

After the dog had pups, we knelt by its basket. Do you remember? With damp eyes you gazed at the puppy, that every so often, sought its mother’s nose, with its own snout. And with unending love and patience the mother gave it a nuzzle and a lick in return. You promised, I too, would be an amazing mother.

You said that for years, you had not made love, to your wife. You loved her like a sister. In a very different way than what we had. You said your wife didn’t shave; that you had never been really in love with her.

You tried to explain it. You wanted me to understand you. To agree, hopefully.
I cried like a baby. You couldn’t stand it.
Sweetheart, you said. I only love you. You know that, don’t you?
I said: Listen to yourself! You said I love you, but I will stay with my wife.

You said: How can you think that you aren’t important to me? You are my woman, my number one!
Darling, you said, I’m so sorry, to make you feel so sad, I only want to make you happy, to make you shine.

But – you cannot let your wife down. If you leave her now, she will lose all her friends, because all your friends are her friends.

You said that above all, I am a strong woman. You thought that I could go on without you. Your wife could not. She would die of sadness.
It’s not easy for me either, you said.
You thought that she would notice if you stayed any longer.

What will you write about in that book of yours?
On an island in the Aegean lived a lonely woman, Circe, who needed protection. I, the astute Odysseus, the noble-born son of Laërtes, came to her rescue.

Pff. You and the rest. You couldn’t tell which side is up. What was in front or behind you. You didn’t know whether you were east or west. Without me you wouldn’t have survived on your stupid boat. I had to rescue you, mate!

Just go. I won’t stop you. I don’t need you anymore, with your cowardly lies.

Oh, how I wish this had never begun! How long will it take before my body understands that you will never come back to me.

What are you doing, standing there? Give me a kiss, and bugger off.
Safe travels, Odysseus!
Oh, wait a minute! There’s a blonde hair on your jacket.