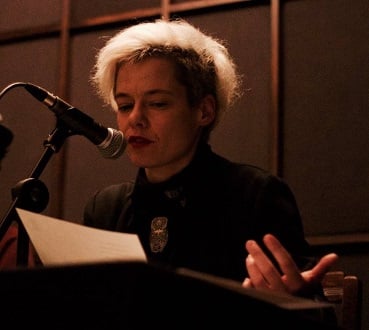 
everyone will remember differently. forming sequences, speak
openly, please: domesticating. what i am unable to shake
inverts. like splitting kindling becomes routine. like pine sap smells
when it catches fire, burns. tree-high trim and panniers,
a wooden frame full of pears, connected by cables,
generating charges. intervals of greenish light. should
someone be shot, for security reasons, how do you feel.

for the longest time i thought wolfs only exist in films still,
or in the zoo. as if history imagined became erosion, that is
loss instead of editing. initially the protocol differentiates between
amplitudes according to type and weight, they appear to be
montaged together. their echo allows for details to separate, as if
one drew halos, courts to capture the heights of their unlikelihood,
counterintuitive. and then fed them back in, in variants and
knots. like with dough, you only have to knead long enough.
to take the air out, the tears. everything, that doesn’t work.

hindering impulses before they manifest. always more complex,
the layers, or developments through silence. as if i could invent
operations, by inhibiting them. cut. cut. melting into the floor
and back out again, hips gyrating, carving the air with the hands,
off the cuff into the stomach. for desire for lard, for loading
foam cushioned drawers, glasses full of fly cadavers that i
collect underneath closed windows. when you came in, did you
feel the need to leave your shoes at the entrance. for protection, or
to reward your presence with comfort. that i want routines creates
no duration, a single butterfly can perforate the line perfectly.
like axe swings, sawing, their howling and cooing, in fog.

one of these days, we went for a walk. ran along a forest
path, in thought, coniferous forest, boreal, while i inside the
studio sat. recording the sounds directly from the floor, with my feet.
cluster of consonants, transmitted through vibration. all the way
to chugach, alaska. i only had to tie knots so that they became mobiles,
journeys of the greatest possible non-simultaneity. for the sounds
without meaning to register, remaining in their presence through
gesturing, give us awhile. even this room is accrued through use.

lucid instances, that mountains chat, that earth, in fur
ruffling feathers, lighter as the periphery. whoever remains, must
spread the white. settle cadences in the tumult of the air.
as if the tones touched physically, and they do. permeable
like the night is. organic evidence. the plane handle is missing.
tender universe, more volatile than. their barely articulated tips,
material in general. i hung up the doors. when i speak
of length, there will be, category mistake, no time after this.

how displaced are the proportions, a chalk stroke,
isolates. the pears blink methodically, aurora, their whimpering
through plasterboard, diffuses. should i want to come back, i would
bring you something. sagas of ghosts that avoid bridges,
and a shield, under which you can hear glaciers melt.
their crackling, fizzling, gurgling and squeezing. the cables grow
up through the roof. dispositions, if circulations close, with
the flow. and what did you make of it. i would like to summarize
in a thesis: the greater the immanence, the more that adheres.


To talk to walls, setting relations. The tongue wants to lick incessantly. Several ends. Prying
out of architectures, I-territories, flickering. I want. I promise. Everywhere interventions,
everywhere voices. In between aerials hum, tips sensing, rules can be found. Things pinned
into trays. One is called Now I’m Talking. Another The Silence Before, which is none. The
truth is I was never without papers. I can determine positions with my tongue. Motifs, their
contours blurring, do they produce too little rage.

Body parts pressed against panes. I imitate their positions. The Position Of Impossible
Beauty. The Position Of Supple Failure. The Position Without Representation. Profit
examines loss. I could write it off. Another side of time. Where eating implies some kind of
merging, elusive, what are you afraid of. Branches contesting the sky, clouds, mark up
above, summers. Semiosis and bird migration. Drumming. Where above begins, inside. It is
the fingers. They wipe light, the wide silence. When the tongue pokes too far out of the
mouth, speaking is hard. I lay similarity on the table. Yet another side of time. No answer.

Expanding out from the ears, nestling, there, against glacial meadows, checking oily pistils
for the sun’s position, traps for, where they hatch, insects, the tongue wants to lick
incessantly. Halves hanging from hooks, on brackets, swinging through shadows, which
wander, halves of what. Do I pull back. Air filters in, sketches lungs, softer architectures,
imbalances ruffle up. This is not an exercise, this is breath factory. I was born, I stick my
tongue through a wall, signal world, forces. Aromas spread slowly, contradictions, smears,
on carrying systems, crockery. As though form were supposed to dispose over interest.
Fixings, drift. “In a brothel, everything is much more open. There are no lies and no illusions
there.” Claws echoing pads, roughened places in the firn ice. Goblin tells fibs, the fox has
fetched it. Voices combing through woods, resisting, recoil.

And pigeons. Their love on ridges. Drawn up against the sky Aurora, the goblin bonnet. As
the earth’s shadow declines the moon, so the flakes find me. Ensnared, entwined, into
guarding. Hardly miserly slapping of gums. The sail, I live, though geographically. When is it
warm enough in a nest? Grasping the angle of tilt from the sledge. Precipitous volcanic
swathe, I praise it, roofing felt topology. But nobody is supposed to see my nipples, nobody,
so the perspectives gleam. Crazily circling seduction, of course I look up. Panorama bower.
It’s raining rabbits by the spoonful. Familiar spirits, you make me shudder. To grasp the
leaving just once. The packer-hatch. Which fall, keep falling towards the mouth. And melt
away. First instance. If grass covers itself with dew, goblin’s earth hair, I don’t give a damn.

Ordered a thing that won’t be repaired, by me, these things come to pass. Which continues
to be a problem of time. For after all I am moving towards it. I’m passing. It in evading,
exposure, to care. Am I hegemonic? I look just lightly past it. Hardly more difficult to
appropriate refusal from denial. Attia writes of endless repair. Shelves, brackets, depots,
chests. What would be repaired there? Someone’s desire to be recognised, surrounded by
the hand of attention? I am here too and I harbour anger. Have paste, canisters, sinister
registers, needle and thread, face made of buttons and stitches, eat me. I resign. Arriving in
wide spaces. In the small things. Please excuse me. I see they are no longer. I mean the
mustangs, their meandering. A word like pride. Go onwards, in doubt. The hand strokes the
saddle, ready to fight. A textbook sentence. Dominance values, patchworks, underbrush,
paths. I watch it go. Shy similes. Chase.

Then this, the leaf-shaped interruption. Alienated from contemplation. And crossing the dip
back-to-back, on tortoise feet. So do they ride, the wise old ones? Offshore habituation,
waves break and inherit a beach. A whirring as if from projectors. I mean it seriously right up
to the point where you come to meet me. Beneath syncopated blankets, hovering. But the
ancillary noises, the little teeth. Their terrible growling over rust-red, swirling fields. Still a
day’s march to the base camp. Through seas of cotton grass, sandy outwash and obsidian,
just stumbling into dying. Remains of installations. Resistance sparking across borders of
data reception. So nobody has to climb through the passage alone. I cried, tentatively by.
Knife. To be a good neighbour. And stay. Is love supposed to be like this or cooked up so?
Sentence like a rope. On which what is alien scatters microscopically, shakes from shoulders
prairie, rib-light. Its muscles prosodic. Think of past nights in the park. Don’t make a fire.
Don’t leave any rubbish behind. Don’t pause at such landscape.