Thomas Cousineau, Professor of English (Emeritus) at Washington College in Maryland, was a Fulbright Scholar in American Studies at the University of Bucharest during the Fall 2014 term. His books include After the Final No: Samuel Beckett’s Trilogy, Waiting for Godot: Form in Movement, Ritual Unbound: Reading Sacrifice in Modernist Fiction, Three-Part Inventions: The Novels of Thomas Bernhard, and An Unwritten Novel: Fernando Pessoa’s The Book of Disquiet. The website for his current project, The Séance of Reading: Uncanny Designs in Modernist Writing, is at The Daedalus Complex . 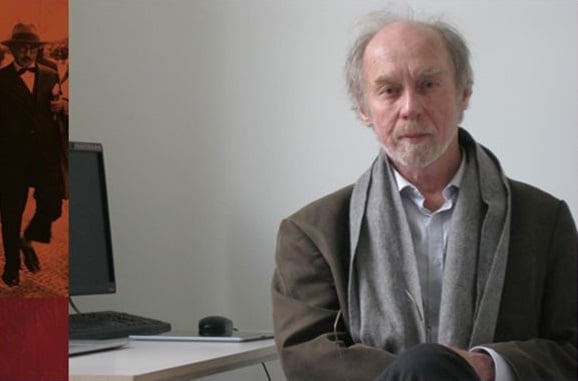 An American in… Bucharest!

Among the many surprises that my wife and I experienced last fall in Bucharest, perhaps none was more unexpected than Klaus Johannis’s victory over Victor Ponta in the presidential election. Living not far from Piața Universității, I couldn’t resist joining in the euphoric celebration that was taking place there. The photograph that I posted on Facebook the next day led a Romanian friend to comment “An American in… Bucharest!” – the exclamation point calling attention, not to her surprise at finding an American visitor to Bucharest but, rather, the way in which the photo led her to revisit – and to recast in altered form – the title of the classic 1950s Hollywood film “An American in Paris.”
Having lived as a real-life American in Paris for a dozen or so years while teaching in French universities, and having learned at some point that Bucharest was reputed to be a “little Paris”, I expected to find upon my arrival there a miniature version of a model that I already knew so well through long acquaintance. Instead, I had the uncanny sense that I had been to Bucharest in some previous existence, but this seeming familiarity had nothing to do with my Paris years. Thinking about this, I realized that arriving in Bucharest with my wife had provoked in me a “revisiting” of our early years together in 1960s New York. Our flight in physical space from Washington to Bucharest had become a journey through Proustian lost time, not to a “little Paris”, but to a “bygone New York.” It was not the capital of France but the French expression “déjà vu” – that captured this experience.
The more tangible aspects of this uncanny revisiting of New York while walking the streets of Bucharest included, in particular the neighborhood bookstores (which disappeared a long time ago from New York), the potholes (which once led a French acquaintance to declare New York “une ville du troisième monde”), the communist-era housing (which called to mind Norman Manea’s comment about the “Stalinist architecture” of his New York neighborhood), cozy meeting places for writers like Tramvaiul 26 (which are reminiscent of the coffee houses that once flourished in Greenwich Village), and the ambient clouds of cigarette smoke (which recalled a youthful vice that I had renounced ages ago).
I was reminded, too, of an exhibition of the work of Romanian painters that I visited in Paris at which I overheard a French teacher declare to his students that “Bucarest est moche” – applying to Bucharest an adjective that fits New York quite nicely as well. My reply to him, “Exception faite pour les femmes!”, calls to mind another remarkable commonality. Yet another French expression – “sans façon” – repeatedly came to mind as I observed the manners and behavior of Bucharesters, in particular their very New York casualness, directness, and lack of pretense. Seeing Bucharest described somewhere as “une ville entre l’orient et l’occident” coincided so well with my own sense – which is such a quintessentially New York experience – of being an international crossroads. I could well imagine Walt Whitman rhapsodizing about Bucharest as he had long ago sung the praises of New York. Carl Sandburg’s poetic tribute to Chicago comes even more amusingly to mind.
While Bucharest itself did not in any way remind me of our Paris years, the Romanian language – which I can now at least read moderately well – did, indeed, return me to the 1970s Paris where I learned, not only to read French, but to speak and write it as well. I quickly realized, however, that what Emil Cioran had lamented as the “camisole de force” rigidity of French makes it so much more accessible than Romanian, and what he remembered fondly as the “élasticité” of Romanian is precisely what made it, at first, so difficult to grasp. It “revisits” French, but in an elusive way that is not, to be sure, lacking in its own special charm. Part of the pleasure that I experienced while learning to read Romanian came from my constantly discovering that so many initially unfamiliar words – “antreprenor”, “birou”, “pierdut”, “peisajul”, “orgoliul”, “împrumuta”, “vizitator” among them – are actually revisitings of words that I learned decades ago in Paris.
Thinking of the two languages together led me to see Romanian not as a “petit Français” but, rather, as a “stretch” version of French, an impression that brings to mind again Cioran’s comment about its “elasticity”. Much like stretch limousines, Romanian abounds in words that seem much longer than they need be. This effect is partly produced by the custom – which revisits my childhood apprenticeship in altar-boy Latin – of attaching suffixes to nouns. I still savor the moment when I discovered that Palatul Poporului was formed by adding the appropriate suffixes to “palat” and “popor” and relish the charm of Hanul lui Manuc, which reminds me of the pleasure that I felt in seeing the title of one of my essays translated into Romanian as “Complexul lui Dedal” when it appeared last year in Lettre Internationale. A whole host of other words which I delight in coming upon – such as “Dumnezeu”, “deocamdată”, “oboseală”, “mincinoase”, “dumneavoastră”, “întotdeauna”, “niciodată”, “dimpotrivă”, “tranzitoriu”, “dinaintea”, “luciditatea”, “dinăuntru” and “bucătăreasă” – do not rely on suffixes to produce in me the enchantment that recalls the tribute that Fernando Pessoa paid to Portuguese when he praised “the hieratic movement of our clear majestic language”.

This uncanny revisiting and recasting of the familiar in altered, unfamiliar forms which I discovered while living in Bucharest and struggling to teach myself Romanian served as the ideal backdrop for the course that I offered to my master’s students at the University of Bucharest on “The Séance of Reading”, which involved our revisiting familiar literary works in a way that – to borrow a term popularized by the Russian formalist critics – “defamiliarized” them. The larger project of which this course was a part deals with a group of canonical literary works most of which I’ve been reading and teaching for several decades but to which I’ve returned as though for the first time thanks to two recent discoveries that reminded me of some favorite lines from T. S. Eliot’s Four Quartets:

We shall not cease from exploration
And the end of all our exploring
Will be to arrive where we started
And know the place for the first time.

The first of these revelations was inspired by Emil Cioran’s remark that “Cruelty is a sign of distinction, at least in a literary work”, and that “the more talented the writer, the more pleasure he takes in devising for his characters situations from which there is no escape”. Cioran continues, clearly warming to his subject: “He pursues them, bullies them, and imposes on them countless insurmountable obstacles, including, ultimately, death itself”. Thanks to Cioran, I suddenly became aware, as I never had before, of the uncanny analogy between a literary work and a torture chamber, in both of which the infliction of suffering is assumed to be justified – whether because the sufferer deserves his suffering or because it serves some socially useful purpose – two rationalizations enshrined by Aristotle in his concepts of “hamartia” and “catharsis”. Familiar lines from Dante and Shakespeare – such as Dante’s telling us that the horrific and eternal suffering that he recounts in the Inferno has been ordained by God as well as Gloucester’s celebrated remark in King Lear, “As flies to wanton boys are we to th’ gods. / They kill us for their sport” – I now saw as concealing an authorial intention behind the cover of divine authority.
While teaching this course, I came upon J. M. Coetzee’s essay “Into the Dark Chamber: The Novelist and South Africa”, in which the author observes that the torture chamber “becomes like the bedchamber of the pornographer’s phantasy where, insulated from moral or physical restraint, one human being is free to exercise his imagination to the limits in the performance of vileness upon the body of another”. Like Coetzee’s essay, the trial in Bucharest last fall for “crimes against humanity” of Alexandru Vișinescu, who predictably declared his innocence because he was “just obeying orders”, led us to explore the analogous immunity from disapproval enjoyed by authors.
The second of the discoveries that led me to “know the place for the first time” occurred while reading Françoise Frontisi-Ducroux’s Dédale: Mythologie de l’artisan en Grèce ancienne, in which I learned that the Greek word from which “Daedalus” is derived had a triple meaning: along with the two that I already knew – the name of the archetypal artist and the word for labyrinth (which survives in the French “dédale”) – it was also the word used to designate the lifelike statues that Daedalus was credited with inventing.
The symbiotic triangle thus joining Daedalus to his two “namesakes” – an architectural achievement on the one hand and an inanimate figure that appeared to be alive on the other – led me to see a previously unsuspected parallel between the Daedalus legend and literary works in which the boundaries between the author, the work itself and the fictional characters that he places within it are similarly blurred. Of these boundaries, the one which has most attracted my attention since reading Frontisi-Ducroux’s book, and which lies at the heart of my project, is the uncanny blurring of the distinction between the plight that causes the protagonist to suffer and the craft that assures the author’s achievement. Bernardo Soares’s contention in Fernando Pessoa’s The Book of Disquiet, that “Anything and everything, depending on how one sees it, is a marvel or a hindrance, an all or a nothing, a path or a problem” provided me with a series of useful pairings as I began my study of this ambiguous relationship between the protagonist’s pain and the author’s pleasure.
The title of the book to which this project will lead, “The Séance of Reading”, suggests that our reading of a literary work transforms it into the medium (in the occult sense of the word) within which the author’s “scene of writing” – with the blurred boundaries and dubious intentions that this involves – comes into view. The subtitle, “Uncanny Designs in Modernist Writing” plays on two distinct meanings of the word “design”, both of which are inextricably intertwined: one of them points to the author’s desire to construct an aesthetically satisfying work while the other reveals his malign intent to cause suffering in his protagonist. An author designs his work but at the same time he has designs on his protagonist. My touchstone here is the American literary critic Kenneth Burke’s provocative assertion that among the motives of narrative is the quest for perfection, which includes the perfecting of the victim.

The title of my introduction – “To Double-Business Bound” – revisits the chapel scene in Act III of Shakespeare’s Hamlet in which King Claudius explains his inability to repent the murder of his brother:O, my offence is rank, it smells to heaven;

It hath the primal eldest curse upon’t,
A brother’s murder. Pray can I not,
Though inclination be as sharp as will.
My stronger guilt defeats my strong intent;
And, like a man to double business bound,
I stand in pause where I shall first begin,
And both neglect.