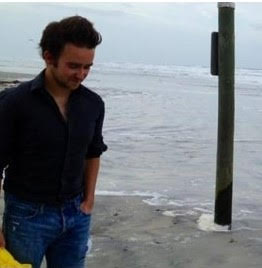 Jodi Johnson was born in Ireland and currently lives in the United States. His poems have appeared in magazines and journals such as The Nation and Prelude.

Tonight low wine in the dangerous love / for which wormwood is the name of the star /
and all of which I know / assembles better off in sleep: peccadillos, allée

so such pedigreed / and at the moment all interdepends, pitch and reign-seeker, love
corrode and soak and nest / for love’s as clear as this: as clear as lesser calamint

abortive in water as all names fluctuate / as Sopater is more Paul than Peter, / being Sosipater
as much as Sopater / and also in final messages lost and unread / not that I discern them,

my spirit is up in love / in that huff and jade of it / as I dark-adapt cowries to porcellana
to pitch distrust against this mistruth: / in your dream the running hearse

rather than a differentiated alluring / always aligned with rest / night: in opium, its methyl derivative /
the plenum, astral, to take fire-notches in the florilegium / as love said it best / in bisecting

itself in jest / for the heart that must unbraid and terminate / and it’s so that the soft ramify
in themselves merely at the ullage / discrepancy from the radialed, umbelled out

alla prima and allantica, short from the atout / signed in aeternum, the coulisse meeting its counterclaim
the fair day meeting in fair a night of ermine / the allantoin meeting what I know of you

himself, itself / by distance and in a sky-soughing colour / soughing in greyer and the bluer
ocean dilatancy from this day / seen so often in sagenite / needing merely eyes not an exegete

the world the shattered seed head of the emmer / the oystering taproot of the salsify / ghost-
elided referents, night-reiterations, / that seeing they may see and not believe /

so I can make / to love you in the love less / novice than novitiate / like the occult,
trick kiss of the clove hitch that holds its parallel back / coram Deo in the coastwinnow

socketed go fallow / concocting, disavowing God where in love / the only fiat’s to liquidate
what is all this to you / the unromantic life of dominion / breeze-pollinated artemisia

to the self’s lead rainwater head.