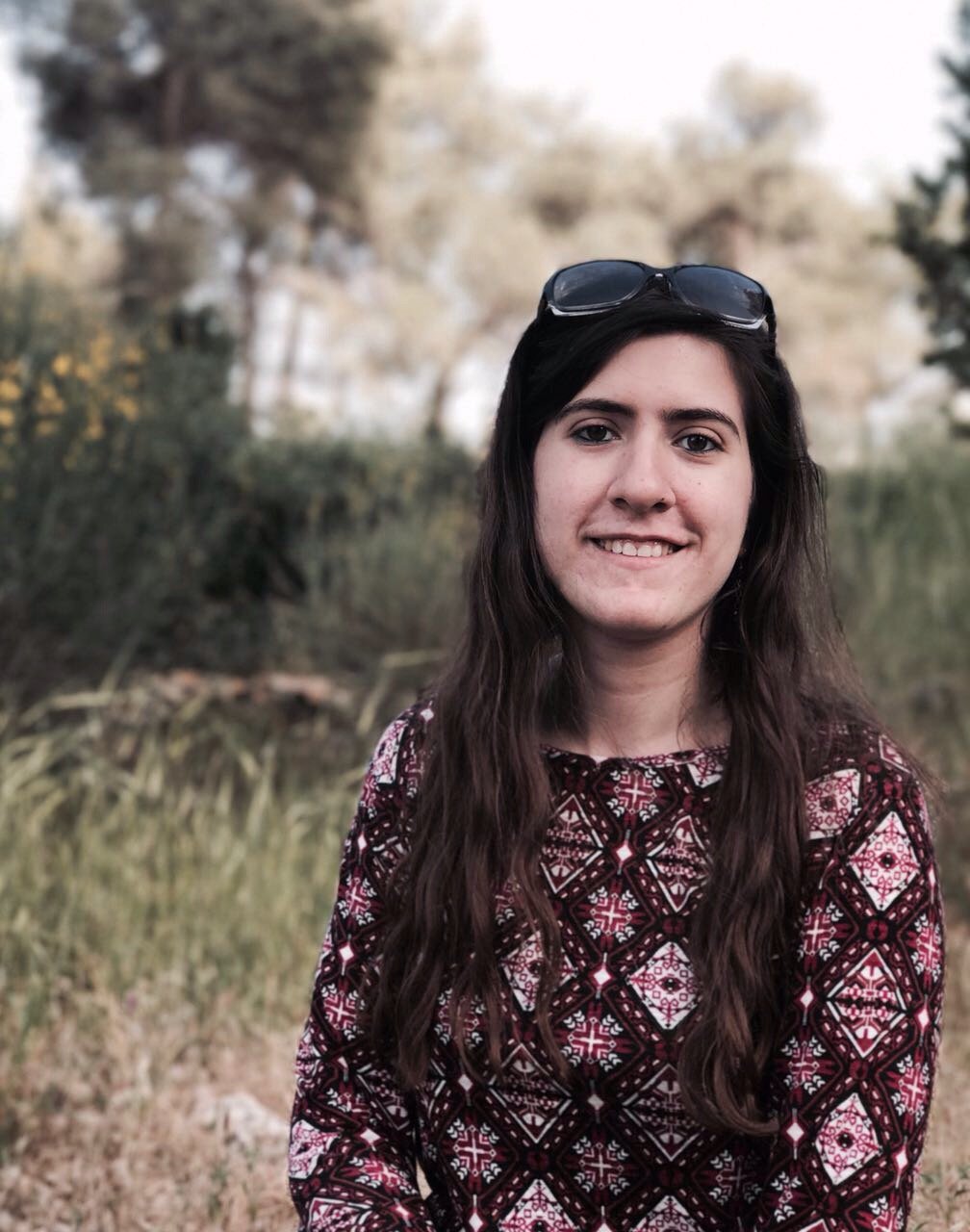 Alice S. Yousef is a Palestinian translator, blogger, and emerging poet, who has published short stories and translations. She holds an MA in writing from the University of Warwick (United Kingdom) and was a fellow at the University of Iowa’s International Writing Program (United States) for the year 2016. She is currently working on her first volume of poetry. She tweets @Aliceyousef.

Rock me to sleep with a gentle coo over your left chest
a treasure box of old cigarettes and the end of stories;
this light coughing is nothing now, make it hush,
with the back of your hand, like an old tale

rock my heavy body to sleep, as I await out of tight-lipped days
disaster and drifting ghosts
that learnt very well to dance with me while I watch you
knit home together with the clicking of two needles

yellow threading over blue, braiding sea-blue for your Ramla,
your hometown, sunshine-yellow for my hair
hereditary like other illnesses. There’s a tint of white braiding in between
to ward off the evil eyes and old lovers at the door

allow me space to be rocked and held, like little children
befriending nightmares, give back the smell of apples I used to pick
from your dress-pockets, rock me to sleep
for I exchanged rocks for my feet

Crumpled are draft notes I write for the sun in its absence,
you cannot will the dead a return
in the gleaming woods of autumnal rain, chipped barks
fallen leaves that bear what could have made a song

there’s a cost I will pay for wrecking my attempts at creating
out of thin air, comprehensive thought patterns
jotted down on sharp edged paper,
once whiter than white, smudged and pressed

to finish my long sentences that have no clear edge
unexpected, this medium, I wreck to write of a sore paper-cut
trees don’t bleed deep enough, yet they are rich in color
there’s no depth to those who crumple when folding forward

to receive the sun again, fold on its rays for winter days.

Your own fingers are long and lean, speedy
around golden locks, my hair
falls onto the ground and I watch you
trim away months; lack of exposure to sun and sea

there’s something about breakage, isn’t there?
a separate notion to the fact that no matter how long you tug
some ends are better handed over to earth
like sawdust, don’t sweep nor keep

but contained, an apple falling from the sky on a sleepy head
the reception of discarded pieces matches
the churning noise I handle
daily and call an act of bravery

we know what we want, don’t we?
just an extra day longer, shorter narrations
to the same stories, bigger houses
smaller hearts to ease the process of severing

from our play – say it is responsibility
lack of exposure to sun and sea
in the mirror, I watch you trim away months
call myself brave, in reverse

it is always a mystery
where we leave destiny to place
our hands.

* Ramla: a Palestinian city near the coast.


Call it peasantry, the practice of hands turning the soil for air
dirt capsulated under fingernails:
a primal attachment that keeps you standing

gone is the old wind trapped under earth
leaving a new face out sunning
the arriving faces, like soil and oxen, turn over these small pieces of ground

call it peasantry, that I hail from where an incision
has been made in earth with a stick,
like a child toying with corners of chalk houses built in imagination

for this is what it takes to make a map
clear lines, curved circles made with black sharpie
consent and coercion, correction and cuts

call it peasantry, that you have the freedom of choice
between barren land and heavy organic fruit
cultivated with last years’ sweat and curling hands

fertile and futile ground
while my sons sleep on the hay of the earth
that produces oil, blood and tears

call it peasantry, that I learnt to write with the same tongue
that was used to break my forefathers’ back
ten stones on each shoulder, words hurling

call it peasantry, that the same land you spit on
grows strawberries and thorn
side by side – like all mothers birthing

call it peasantry to the Aradi, the territories
that shape how peasants stand straighter in queues
how peasants speak in tongues

dirt-caked peasant mouths smeared with honor
this primal desire, this peasantry is territorial like wrath,
sprouting under your hands
tell me then, under what soil do I bury my anger?

A stop on Earls Court Corner
For Adam


Tyrian purple I decode for you, the name I read from right to left on the street corner
a tale before I pretend to lose my native tongue to process exile
even the bread we break later we don’t offer thanks for properly
to the gods that have kept their eyes open while we spilled out
declarations in the name of youth. A lack of knowledge of the variations on love
presents itself where we store our worries. We play the lips
lend our whispers to voices and heavy lyrics. We change along fatigue-
lines in the suburbs of the city by skills of songs and faulty navigation
all the rights are left in suitcases and those left have no rights to commit
to a year-long tapping of grey clouds on the windowsills. Night falls easier on the North.
There are long hours of waiting, long wails learnt in woods
where we cycled until the shadows morphed into Canada geese
where vixen overheard conversations and envied the freedom of smoking
stopping on Earls Court corner, a city away, you lift your eyes up
ask me about the new night that differentiates itself with robust stars
where the street and its corner is an occasion to remember
that starlight becomes human flesh, falling melodies and points of reminiscence
the moment we find our hearts’ language.