Steve Rushton studied art at Kingston Polytechnic, exhibited regularly in England during the 1980s, studied art history at The Courtauld Institute and Birkbeck in the 1990s, and became an art and design history lecturer and arts curriculum area leader. He returned to art and started writing poetry in 2004, exhibiting regularly in London. His first chapbook collection Burning a Paper Plate—Towards a New Art was published by erbacce-press in 2015. His poetry has been published in Romania, Poland and England. A poetry single Sweet Sex Education Teacher from Chichester was published by Not Your Average Type in 2012. 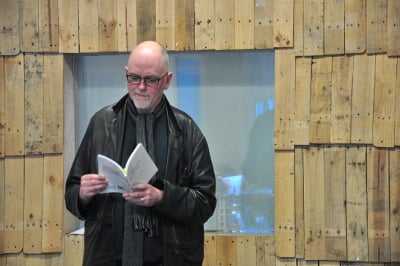 I’ve been thinking. A confession is in order. I read contemporary poetry less than most
practicing poets. Is this laziness? There is a reason. I went on a reading binge, and got bored,
feeling the standard to be poor (based on nothing more than instinct). That’s when I started
liking eastern European poetry – trawling through Bloodaxe’s Staying Alive, Being Alive and
Being Bloody Human, (“real poems for unreal times” I ask you) the ones I preferred were
from east of the Alps (apart from Ireland). And that got me thinking more. Political
struggle/occupation is good for poetry—something in common other than the tortured poet to
write about, a language of opposition, however obscure and labyrinthine. Poetry needs an
edge other than the self (or itself). This is lacking in much western European and North
American verse. Recently, at a poetry event with an open mic, in-between featured poets (one
was the editor at a poetry society), I read an English translation of a poem written by a
Romanian friend. Out loud, it seemed much better than everything else in the room, in the
richness of language, rhythms and meanings. One person came up afterwards to say how
impressed he was, but most did not.

Certain countries during certain times do not produce great art. This can go on for centuries.
Despite poets saying how exciting the English scene is, I’m thinking: are they living an
illusion? Imagine a country producing bad poetry. Would they say “we’re producing bad
poetry”; or would they say how exciting the scene is. History tells us practitioners are not the
best judges of their work. An example—England hardly produced a great painting between
1851 and 1900, and not many good ones either, while across the Channel…

Why should I apply to publishing houses if I don’t like them? Why should they like my work
if I don’t like theirs? It’s not as simple as that I know. And you meet poets, like them, like
their work, more than most you haven’t met—is that a coincidence? Moreover, and here’s the
rub, if you like yourself, have an ego not shattered beyond belief, how objective can
assessments of your own work be?

There are always dichotomies, minutiae and the grand sweep—we see it in science. There’s
an argument for separating from contemporary practice, despite what everyone may say, a
flawed tactic, but worth a go—I’m off to live on an island. Which brings me to Molière’s
The Misanthrope.

Do you really need to write poetry and if so, why the deuce must you rush into print?
The only people who can be excused for letting a bad book loose on the world are the
poor devils who have to write for a living! Take my word for it, resist the temptation,
conceal what you do from the public, and don’t go and prejudice the honourable
reputation you enjoy… for the sake of receiving at the hands of some grasping printer
the wretched and ridiculous title of author.

There are many translations of poetry published in the UK, by English PEN and MPT
(Modern Poetry in Translation) for example. Of interest recently was a debate about
translation—a Romanian poet and translator stating in a preface that all poets should be
writing in English, citing Joyce and The Tower of Babel, that god smashed it in anger at
peoples speaking the same tongue and together trying to build a tower to heaven, and how if
all poets spoke the same language perhaps the world would be better et cetera. This incited
heated discussion—the death of national languages, imperialism et cetera—I didn’t take one
side or the other, but delighted in the debate (for more on this go to
www.poetryartexchange.wordpress.com).

My brother bought me a book recently, The Poet’s Tongues by Leonard Foster, about
polyglot poetry, the use of different languages in the same poem. Parallels were drawn with
visual artists who were also poets (the practice of thinking in a different language [including
the visual] helping creativity). Foster quoted an American Brion Gysin stating:

Writing is fifty years behind painting. I propose to apply the painter’s techniques to
writing: things as simple as collage or montage.

I have seen contemporary poets using collage over 100 years after its invention by Picasso
and Braque (maybe it’s just a useful tool). Instinctively I feel art’s still ahead in terms of
innovation. Talking to friends, one argument comes up: art is a commodity, it enters the
mainstream of capitalist culture, is valued, bought, sold, challenged, in a way that poetry is
not. Poetry/art projects I’ve been involved in tend to collaborate more with galleries than
poetry organisations (Centrala in Birmingham and One Hundred Years Gallery in London
being examples), but maybe I’m more sympathetic to them.

Ending on an optimistic note, cultures change, and in the future one may emerge, perhaps
more nomadic, with less use for art objects, more use for portable verse. Or to sit round the
fire, night after night, listening to results of desperate scribbling, rather than getting pissed at
some terrible artist’s private view—can’t wait! I’ll leave the last words to Molière.

Yet he needs come pestering me for an opinion on his verses, and because I treat him
honourably and will neither dissemble nor betray the truth—he joins in accusing me
of a crime I haven’t committed! Now he’s become my bitterest enemy! He’ll never
forgive me for not liking his sonnet. Egad! That’s human nature for you! That’s what
vanity leads men to!

I’m sorry Sir, to be so difficult to please and I do most heartily wish, in consideration
of you, that I could have thought better of your sonnet.