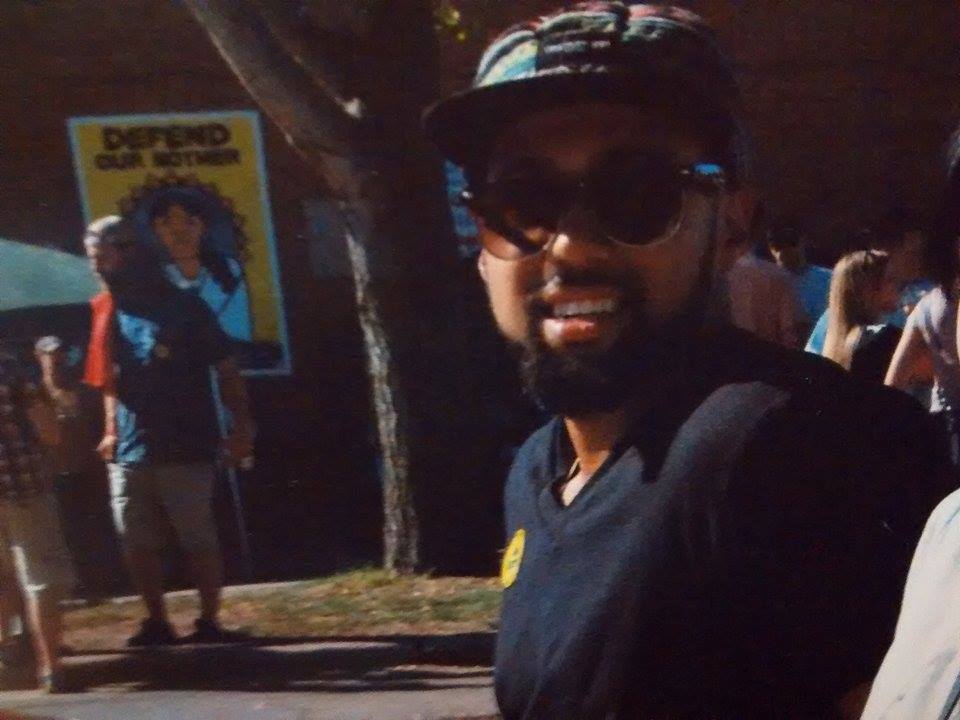 Jeff Holmes is a graduate of the Iowa Writer’s Workshop. Previously, he was awarded the Dean’s Fellowship from the workshop and received the Burnett Howe prize for fiction from Amherst College. He often writes about race. He is a mulatto and insists on being called so. He grew up in two homes. His work centers on the intersection of race and “race madness” in America.

The Legend of Lonnie Lion

Only two things my pops said ever stuck with me: Don’t marry a white girl, and never pick the skin off chicken—it’s the best part. Lonnie Campbell could run so fast. Lonnie could hit so hard.

My pops was big enough to block doorways. It’s hard to imagine him with my mom. She said she could almost fit her whole body in one of his pant legs. Back in the day, she could play tennis well, and after I was born my pops played with her every day, so she could lose that child weight and get back in shape. Then they’d bike through the burnt out California hills, those rose-gold, cracked slopes that jutted up between everything and kept it all private. He’s fat as shit now.

It’s funny how quickly we can forget people we don’t know, don’t really know, the people that linger only for a second before our eyes and then take off, not finding enough in us to stay. If you try to capture them, you’re left with faces that are constantly sliding into shadow. My pop’s face bordered on that darkness but refused to slip under. I remember his smile, let’s start there—it was a little too wide, maybe, but his whole self was wide, so it worked. Sometimes, my aunts would just look at me, astonished by the way I sat or laughed. Then they’d tell me I was my father’s child.

When my parents split, pops stayed out west and my mom came east to be with her family. But years later, when I was old enough to fly alone, she would still buy plane tickets and drive me to the airport even after their love had long fallen apart. She even smiled as she walked me to the security line. The smiles were always nervous—come back you, the you I’ve been building for years. Come back the way I’ve made you.

When I walked off the plane into the SeaTac airport, pops was waiting at the gate in beat up loafers and sweats. That’s the way he rocked, comfortable. He used to play football and wear suits to games, but, I guess sometime after the lights dimmed and the yelling stopped, he just wanted something more forgiving. His massive frame drew stares as he scooped me up; he said, “let me smell ya, make sure you’re my cub.” Then he dug his uneven beard into my neck and made snorting noises. Then he let me down and said I was the right one. I laughed and we left those people at the gate.

After he threw my bags in the trunk of his old Deville, he squeezed himself into the driver seat and started the car. He was a shitty driver. His legs were too long and got tangled beneath the wheel. He got his license revoked later, but not for that. After he turned the radio on, he accelerated into horns and oncoming traffic.

“So what kind of music you into now?” he asked.

“C’mon G-Money, you gotta tell me more than that. Who you listen to?”

“What you mean you dunno,” he mumbled trying to clown me.

I watched the state grow greener as we left westward.

“You ain’t listen to my man Ricky Ross?”

Pops looked over at me—the car swerved a little. “You know if I was a rapper, I’d be Rick Ross.”

“You think I’m fat? Your cousins call me ‘Uncle Love Biscuits.’ I only stay big for them.”

“You know if they didn’t like it, I’d be lean and fast like my playing days. They used to call me Lonnie ‘lion’ Campbell.”

He stared over at me real serious.

The highway got wider once we were out of Seattle and I watched the people drive slowly. I liked when my pops talked about his NFL days. He got animated and used my name for dramatic effect—Gio, G, G-Money, or when he told his tallest tales, Giovanni.

“Are you dunking yet?”

“I was dunking at thirteen,” he said.

“I could still dunk now, G, that’s God given. Just cause I got some heft over these muscles don’t mean the muscles ain’t there.”

I looked over at my pops, who looked like some kind of caramel-chocolate sundae in his tan sweats, stuffed into the driver seat of the Deville and I broke out laughing. My pops was funny when he lied; maybe, that’s why he could do it his whole life.

My pops words came wholly too late. In the summers, before we started to find our way back towards each other, I picked the skin off of a lot of chicken and crushed on so many white girls.

In my junior high years, I sat on the back of the bus, where the cool kids sat. I was cool once, before the nerd in me took over. I was young, true, but just old enough to get erections at uncontrollable times and have to be thrifty with notebooks and book bags. Chiara sat in the back of the bus too. She was beautiful in a way that dictated my taste for years to come, the taste I’m still trying to shake or falling into. Chiara sat across the aisle from me talking to her red-headed friend Shalan. I could barely catch their voices over the blender-engine rumble.

She was my first crush and I didn’t know of rejection yet, so when Shalan got off a few stops before us, I slid into the seat like I imagined my cousins might and I took a gigantic Hershey kiss out of my bag that my mom had helped me pick out. My mom had told me to write a card, but that was corny, but everyone liked chocolate right? I put it in her palm and it was larger than her whole hand. That’s the first time I’d seen a girl really blush. I let the weight of that chocolate mammoth settle for a second like I imagine rich men do when they propose with those dookie diamond rings. Yeah, I had it like that. Then I just leaned over and asked her real calm, “you wanna go out with me?” At first, she looked like she couldn’t hear me. Her hair was dark blonde almost brown. She kept her pale blue eyes turned away from me and I thought she was just shy.

“I just thought,” I continued (and where I made my first in a long line of mistakes with women), “I like you, and we sit together a lot, and we have the same stop.” There was still no response and I started to get worried.

“Do you want to be my girlfriend?”

My words came out quicker and quicker.

She sat back up straight, further away from me and I felt a sinking. We pulled up to our stop, passed the gas station, where I got sour patch candy in the morning with the lunch money my mom gave me. I was still hoping. She got up and headed for the door. I followed. Outside it was just us and the overgrown lots of weeds and stillness. The bus pulled away and she started to walk home towards her street that turned off towards the bay.

She turned to face me.

“I just could never have black babies.”