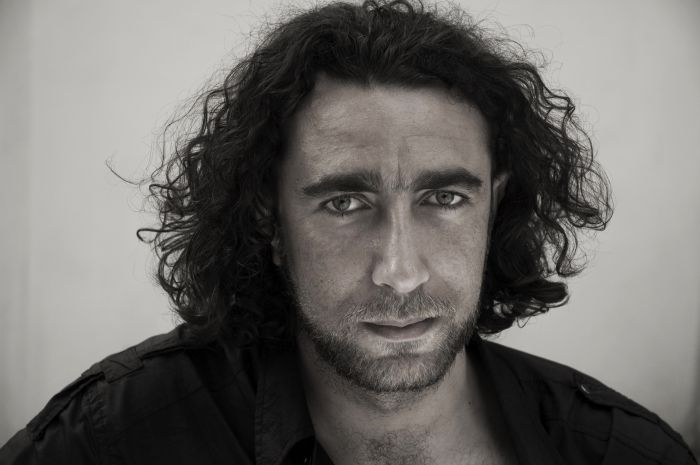 Ghayath Almadhoun (Syria, 1979) was born in a refugee camp in Damascus, the child of a Palestinian father and a Syrian mother. He studied Arabic literature at the University of Damascus and made his debut in 2004 with the collection Qasaed sakatat sahwan (Unintentional poems). Together with the Syrian poet Lukman Derky he set up Bayt al-Qasid (The House of Poetry) in 2006, a space for freewheeling expression in Damascus. In 2008 he moved to Stockholm, where he sought political asylum. In Sweden he published another two poetry collections, of which the second, Till Damaskus, he wrote with the Swedish poet Marie Silkeberg. With Silkeberg, he also made a number of poetry films on topics including the bomb attacks in the Gaza strip. In recent years, Almadhoun’s poems have been translated into a variety of languages. In his poems he describes the experiences of asylum seekers, homesickness for a homeland, and the guilt of a young intellectual who has abandoned his native country. In 2012 he was awarded the Klas de Vylders prize by the Swedish Writers Union. His most recent collection, La astatee alhoudour (I Cannot Be Present), was published in 2014.

The city resembles wrinkles wrapped around one another like the bodies of
those forgotten in the prison cells of the third world, as prominent as
a punctured memory, as conspicuous as feast day clothes, as brazen as the threads
in a Persian carpet. This city has always fascinated me with her accumulation of
layers, one layer sleeping with another, giving birth without being pregnant, a
city that wears a burqa on her face and leaves her brown legs bare. The city cuts
through me when I try to seduce her. As I come and go each day, I cut through
her like the godfathers of the proletarian revolution cutting off the heads of the
bourgeoisie, then the heads of their own friends, I cut through her with the
patience of a camel, the zeal of a Kalashnikov and the appetite of a locust
heading for the fields in the morning.

The city is like memories, vague, but shyly caressing reality, burdening
our sleep with an increase of desire and our conscious minds with more
questions and, like the funerals of strangers in strange cities, arousing pity
without shaking hands with grief, moaning in the night as if afflicted by a desire
to migrate and scratching the skin of our conversations with nails of obscure
yearning, then slipping into bed beside us. When we used to wake up in the
middle of death at the sound of her sobbing, she would cover her face with a
pillow and our dreams would come crashing down.

The city is like tourists, with their rashness, digital cameras, sandals
unfamiliar with the language of pavements in the cold north, heavily taxed
cheerfulness, hashish cigarettes that they deny all knowledge of when they
return to the land of snow and ice, the city is like them with their fake bronze
colour after their bones have soaked up the sun and vitamin D, and their
cameras have soaked up the city.

The city is like sellers of lottery tickets with their lifeless faces and their
reports to the intelligence services following the rise in the price of bread, the
city is like them as they plant dreams along the streets, promising millions to
passersby, while their children are suckled on water and only win hunger.

The city resembles her seven gates, open and without surveillance like the
beds of whores, closed to the tiniest ray of light like the tombs of the dead.

Here the city lies on her back, growing paler as the sun burns her skin, and the
noise extends to the city limits, from the head of the river to the middle of her
soul, stretching her umbilical cord that has never been cut and casting her poor
to her outer edges, her poor who, whenever they try to claw their way up her
body, fall under the wheels of her vastness. The scratches that inhabit her skin
are her roads intersecting with non-divine providence, and the black cloud that
hangs around her neck is merely the result of her chronic reluctance to give up
smoking. O god, how can I scale her breast that looks down over her wrinkles,
where grey houses extend from the base to the nipple, buildings that have
accumulated from the chance discovery of pleasure between a man and a
woman up to the beginning of civilisation – it’s incredible how a breast can be
called a mountain without the use of a metaphor – and where a path taken by
those who have gone through life without loving their enemies is still there, like
a tombstone transmitting history? Here the city lies, fresh, as if she doesn’t
precede the alphabet by numerous disasters, surrounded by walls that don’t
resemble a siege, and you can almost, if you stop to listen carefully, hear the
faint echo of our earliest ancestors, who drank of her waters and some of whom,
by virtue of heredity, have infiltrated your blood that is blighted by songs. She
is the earliest cemetery, which people have celebrated as evidence that
memories are real. I pass her, a stranger to myself, so she passes me without
recognising my face. I distinguish her in the faces of strangers who have
belonged to her, so she and I are briefly deluded into thinking we are one. She is
old like a fossil and I am new like the end of history, I hold on to her dress like
a child and she holds on to my heart like a woman and we commit a poem, I the
dreamer hunting down verse and she reality giving birth to children and not
raising them, I the ephemeral and she the eternal, everlasting, I the fatalist
stuffed with transcendental truths, she the heretical realist. There is no
consolation for me, and no harm done to her, except that by chance we are
lovers.

Descending the road towards her waist, I cross paths with doubt. He is heading
for complete certainty, and I almost brush against his smooth edge. I smash
time’s piggy bank and take out three days and a few hours, the moments of joy
that I’ve collected throughout my life, which is still just alive. A Kalashnikov
that I inherited from a communist who happened to pass by my wound still
weighs down my right shoulder, so my left shoulder has become higher and
prouder. I am sinking deeper into the quagmire of my days, the threat of being
slowly sucked down is more imminent. The orange tree that keeps appearing in
my dreams and tastes like Gaza, with a faint bitterness resembling the air of
Damascus, resists definition by Wikipedia but not by Ibn Arabi. At the end of
the alley leading to the “Street Called Straight” in Damascus I meet Ananias
and go with him to Judas’s house. We walk along dazzled by the details that fall
down from the sky as a result of artistic flaws in the Lord’s architecture. We
meet martyrs waiting in the lobby for someone to answer their existential
questions as to why they are crammed together with their enemies in one room
under a banner reading ”We are all martyrs”. This city eats her brother’s flesh
and belches because she is too full. This city is fenced in by stories and the
prayers of those afflicted with piety. This city has not cut the umbilical cord that
joins her to death, sharpening her knife every night in the hope of approaching
carnage. If only I was as warm as a car’s engine in your sad winter or as cold as
the grave in your bitter summer, o concrete desert, o city that drinks tea to the
sound of battle songs, and dances the dance of defeat on the corpses of her lost
sons, amen.

I don’t have light enough in my quiver to distribute to Maeterlinck’s blind men,
walls enclose meaning inside my soul as the city encloses my memories. O my
believing soul, o my heretical body. Now I shall confess my original sin: all my
poems, which I planted in the flesh of your days like a rusty knife, are not my
poems. I stole them from those who had been forgotten, or who had forgotten,
collected them from white hospital beds and from the groans of the tortured.
They are the memory of women sacrificed before God’s masculinity, the
gurgling of those who have died of cold in the midst of the song, the dream
when it is devoid of dreamers. Yes, they are not my poems, they are the
petrified memories of those who lived in times long gone, whose names we
don’t know, but whom we carry in our pale features, they are wishes not
realized, second-hand laughter, they are not my poems, they are the breaths of
the drowned and the hanged, and the souls that flowed out through small holes
made by the guns. They are not my poems.

Not only me,
All of us are strangers,
Otherwise how can we explain the city?

The poet whom I met one bar in Damascus
…
Was eaten by the wolf.

From the start of the body to the limits of desire, the night drops wound by
wound, and I take refuge in the light. Women hidden in their jilbabs remind me
of the masculinity of the world and I use femininity as a crutch to make my
escape. The weariness that flows behind the people in the street pulls me down
to the depths, this city does not resemble joy but possesses an ambiguity that
afflicts us with fleeting happiness, she does not resemble death but is governed
by endings, she is injustice distributed with scandalous fairness, a woman’s
dream of emancipation, God’s sigh, the head of John the Baptist who runs
weeping through our nights, the alliance between the poem and the executioner,
between the fresh smell of the walls and the aroma of the alleyways that lead to
the beginning, she is Damascus, the never-ending blood wedding, Salome’s
dance that rains days on our days, the end that is beginning now, my mother’s
prayer moistened with legends, the minaret that brushes the fingers of God, her
voice has a taste like the colour of poetry, her body the topography of a sinner,
she is Damascus that gave birth to me and fell to a sniper’s bullet, so we were
born together, I pull her towards me and the song breaks off, she pulls me
towards her so the poem hurts me, ‘O you who believe, do not approach
Damascus unless you are drunk for she is inclined to drowsiness’, she has the
slaughtered songs, the minutiae of prophecy, the smell of inspiration and we
have mysticism, beneath her navel, naked, we are her ungrateful sons who were
lost in the north and she is our mother who fed us only on fear so we inherited
the Sura of the Poets, she is Damascus, the apple of light, the book of sorrow
and the letters of Ibn al’Arabi that have not yet arrived.