To be able to transform, the “I” has to accept total loneliness and emptiness

The volume Dark Matter begins as a portal through which the voices of Nature (plants and animals) are heard. Pain is present in space, just like on Earth. The travel and the penetration of pain catalyze a new beginning, generate another genesis. What is the role of mimesis in the volume?

That depends on what you mean by mimesis. I used for example images and terminology from natural science, without any real knowledge about it, and I interpreted it my own way and also perverted it into something I considered to be unconventional. I used perverted natural science to change the rules of matter in the new world I created in this book. It ‘s kind of a protest against the existence as a whole. I didn’t want to accept the rules of being, but at the same time I wanted to present a new order with some kind of precision, not in a vague, new age-ish manner. 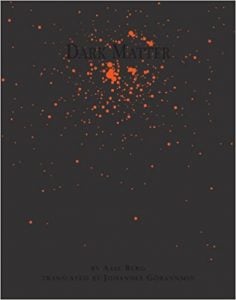 The name of the new created entity is heard as an incantation. The sound of its apparition is also the first evidence of life. The new life form liberates the old, fleshy form, contains memory of the former flesh and land histories. What is the nourishing element for this future life?

I actually don’t know. It’s for the reader to say. I guess it will be different for each reader. My ambition was to turn the book into a black hole itself, and who knows what happens to each individual in a black hole? But for me, being in the process of writing, it was possible to free myself from the demands of reality, not through harmony but through aggression. I thought at the times that reality was much wider than it’s treated in everyday life. In a way, the book is like a person with Aspergers syndrome – you absorbe everything, you sense everything, you can’t really choose between the impressions. It’s like a camera without focus, a wide screen with no judgement of what’s supposed to count as important in normal life. Details, even in language and letters, make as much sense as the whole.

These new times of flesh and history attract the black hole. The black holes are nurseries and incubators for forms of life, they consume and perpetuate each other. Are there any borders, any obstacles?

There are so many obstacles. For example, the “subject” is continuously fighting to survive and reach further in this strange world. Maybe I was somehow inspired by Tarkovskij’s Stalker? You have to maneuver along paths you have no knowledge about, but still, you have to sense the booby traps. You have to register every item of the new world (and word) by working through it.

The release of life occurs through great pain. If water is a feminine element, then the characters, such as Zacharis, have to submerge in it. The ontogenesis does not respect any chronological rules; it is inverted. The bodies travel in de-evolved forms. Is there any attraction between the incipient entities and the existing ones, between structures, gases, slopes?

There’s attraction, but also repulsion, between every element in bodies, feelings, materia, metal, vegetation, weather, whatever. It’s a mess of attraction, repulsion and aggression, and it’s constantly changing. You just have to accept the fact, a new condition every second. And by the time, maybe you can even affect it.
But there is also some kind of normal love stories involved. Impossible love stories, of course. All love stories are impossible, in one or another sense.

The exterior world feeds the mouth of the new life structure. The blood of the world pumps into this body and becomes an organ of perception for the exterior world.The forms are capacious, but instable. What is the role of disequilibrium?

In imbalance, you have to find another kind of strength. It’s like real life, actually. You can’t find safety or comfort in work, money, not even in love. You can only find it in trust that everything will sort itself out in the long run. It’s like a puzzle. Sooner or later you will succeed to build the picture. It doesn’t have to be a happy ending, not harmony, but the confused pieces have somehow to connect in a pattern, even if ugly. The most interesting thing is the future you could never have predicted, but in the back mirror you can see it turn into something that is possible to live with. Not perfect, but creative.

The transformation implies successive deaths, “The dying I”, in order to open to the multitudes of the “I.” What brings on the reconstruction of shadows? Is it possible for memory to be recovered once the “distance increases distance”?

Yes, I think this book is about deconstruction and rebuilding memory in a new way, from a new angle.

The volume expands upon the idea of permeability to have multiple hosts, multiple wombs, the idea of voices that can (not) be heard, the idea of access to things that may frighten us, the maternal idea of a black foam, the idea of species that “remain their entire lives in a single phase, which correlates to the fetal phase.”

I think this is about possibilities. That maybe even the life forms are created by our view of them. We see what we are looking for. I don’t really know how to express this without sounding like some kind of dopey hippie, but again: I’m into precision and I believe in science, not in god. There’s no sign of god in this book whatsoever. To be able to transform, the “I” has to accept total loneliness and emptiness. A person who believes in God will never fully accept loneliness.

The optic or acoustic illusions function the same way as the inverted ontogenesis. The access to these worlds and contorted genes is just for the initiated. Each time one meets another, there appears the danger to become wounded. What enters, what gets out, is there an autophagy of identities which can`t remain steady, which can`t resume to/as an “I”?

I like your interpretation – maybe that’s all true. The thing I know is that the “I” is constantly transforming, it’s travelling through everything it crosses and it changes by it.

Do all things belong to something, are they gathering somewhere? Do the stray ones find places to cram the deteriorated ones? What is the logic of the space, “the logic of the great redistribution”?

I wish I could answer this. But I don’t have the answers – in this book I am mainly asking questions for the reader to answer or maybe just travel through. This book is more intelligent than I am. As I said, I wanted it to behave like a black hole. Some readers will find that this is working, others won’t feel a thing. The only thing I can say is that I felt the black hole when I wrote it. Unfortunately not anymore. I can’t go back into that process. I left the answers behind when I finished writing.

Are we a compromise of space? Does the possibility to deform us mean power? 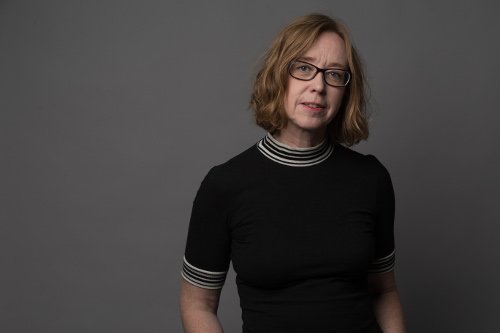 Aase Berg is the author of seven books of poetry in Swedish as well as various works of fiction and prose. She grew up in the suburb of Tensta outside of Stockholm. In the mid eighties, she was recruited into the radical group the Stockholm Surrealists, which she participated in for many years, and which in many ways shaped her aesthetics.