Cia Rinne (Gothenburg, Sweden, 1973) is a poet and artist based in Berlin. She writes minimal, visual and acoustic poetry in different languages, and collaborates on performances and sound installations. Her publications include the books zaroum (Helsinki, 2001), notes for soloists (OEI Editör, 2009), both published in France too with Le clou dans le fer (zaroum et notes pour solistes, 2011) and as UBU Editions, as well as the sound piece sounds for soloists (in collaboration with Sebastian Eskildsen, 2012) and should we blind ourselves and leave thebes (H//O//F, Moss, 2013). Works of hers have been shown a.o at Signal Malmö, the Turku Biennial, the Kumu Art Museum in Tallinn, the Grimmuseum Berlin, Den Frie and Overgaden in Copenhagen, at the ISCP in New York, and at INCA Seattle. She has also collaborated on documentary projects with photographer Joakim Eskildsen, their latest common publication being The Roma Journeys (Steidl, 2007). Her new book including the recent series l’usage du mot was published by kookbooks (Berlin) in 2016. 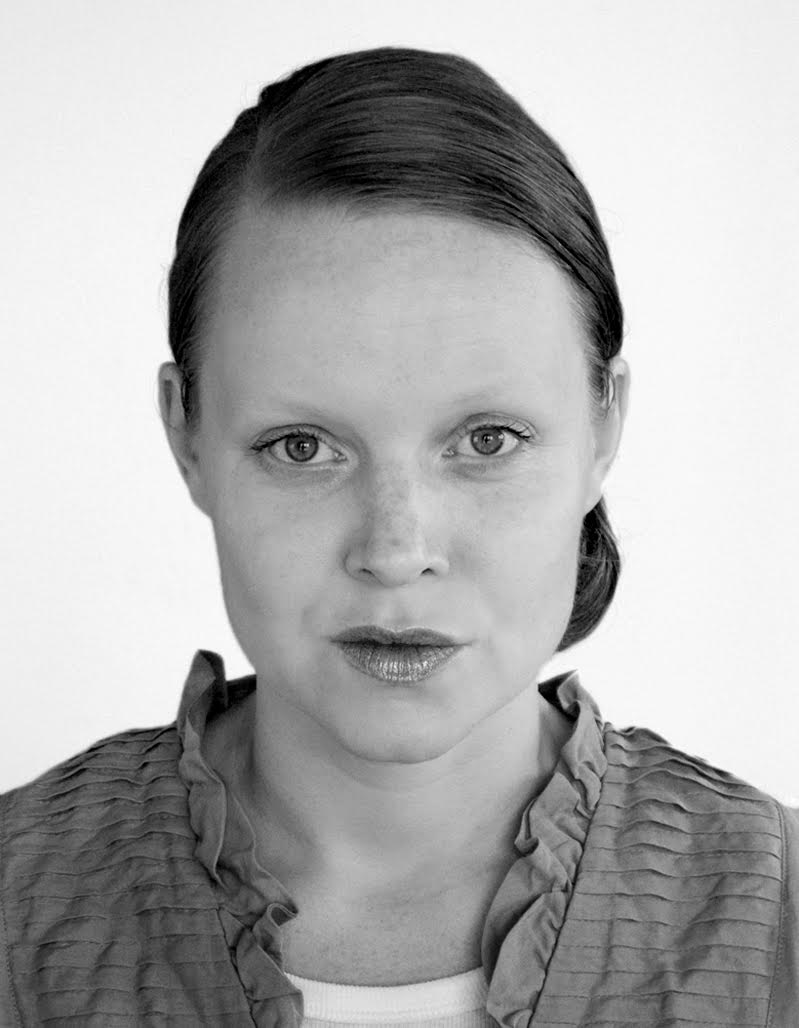 It is almost a miracle that the Roma still exist

Between 2000 and 2006 you and Joakim Eskildsen undertook travels in Hungary, Romania, India, Greece, France, Russia, Finland, spending time and living among the Roma population. What expectations did you have before engaging in this project?

When embarking on the project, I was very curious about it, I wanted to learn more. Before The Roma Journeys, we had spent several months in South Africa (to work on the book iChickenMoon that was published in 1999), where we lived with a Zulu family in a rural area and a township. It was a couple of years after the end of the Apartheid era, Mandela had been elected president, and people were optimistic about the future. Still, the traces of the segregation were apparent. We found that the different groups, Blacks, Whites, Indians and Coloured, lived totally separate lives, not knowing much about one another despite the little physical distance between them. Fear, prejudice and established structures kept people apart. To me, it was like staring openly at the racist structures hidden beneath the European culture. In South Africa, nobody ignored the issue of skin colour. The thoughts this put into motion stayed with us, and upon our return to Europe, we found that here things were not that different, although they might not be as visible as they were in South Africa.

Growing up in Germany, I hardly heard anything about the Roma really. There were no visible Sinti or Roma where we lived, and while I went to a school where we frequently learnt about the fate of the Jews, our history teacher mentioned the Sinti and the Roma just once. My very first encounter with the Roma was at the same time my first encounter with the prejudice and hatred they face. I had just given an elderly woman some change in the street when I found myself yelled at by another woman who rushed towards me to accuse me: Why would I give that woman money? ‘They’ were just begging in the street while their Mercedes was parked around the corner! I had no idea what she was talking about, or why she was so furious. Only later I learned that this peculiar belief was a common prejudice against the Roma. I had a sort of agnosticism concerning such general concepts. My parents being from Finland, my mother belonging to the Swedish-speaking minority, I sympathized with other foreigners or minorities, and knew how easily one could become the target of all kinds of mystifying beliefs. Concerning the Roma, prejudice is almost all there since there is a complete lack of information and education on Roma history, culture, and their situation in Europe. This void is filled with myths and beliefs originating in the late Middle Ages that have stubbornly survived despite a diverging reality, and regrettably been perpetuated by European literature. Shakespeare, Cervantes and Goethe have all contributed to a distorted image of the Roma as a sensual freedom-loving people, who have mystical power and do not have to obey the law – while reality was quite the opposite. For the European civilization, it seems there has been a need to distance itself from the ‘nature people’ so as to prove its own superior state of civilisation, and there has been little interest in changing the existing misconceptions.

It was when I was studying in Athens, and we saw Gadjo dilo by Tony Gatlif in a therinó, a rooftop cinema, that I was struck with curiosity – did this life exist in Europe? When we first visited a Roma community in Hungary, where we ended up spending several months at Magda’s house, an elderly Roma woman, during the course of a year, we did not know that the project would extend in such a way. We thought we would just concentrate on the two Roma streets outside the village, a sort of Perecian attempt at exhausting a place. I had to learn the language from zero, and my attempts at finding out about the culture and history of the Roma there were rather fruitless, but we got to know the people, shared their everyday life, heard their stories, and became friends. When we visited the family of Aurelia whom I had met in Berlin, we soon realized that what we had seen in Hungary was just a tiny bit of the diverse Roma life in Europe. In Aurelia’s village, Clejani, in the southern part of Bucharest, the Roma were Lăutari (musicians), Fierari (smiths), and everyone spoke Romani. Her grandfather Neacșu Nicolae was a famous violinist who had played with the Taraf de Haïdouks, and appeared in Latcho Drom. The more we found out about the Roma and read about their history, the more we got interested in the situation of the Roma on the whole, and the following years, I read everything I could find, contacted human rights organizations, and we spent long periods visiting Roma or, if possible, staying with them for some time. The more we learnt, the more curious we got to find out more, and to get an understanding of the situation in other countries. I believe you must be slightly obsessed to work in that way, and it was a project I would most definitely never be able to do again with so much intensity. 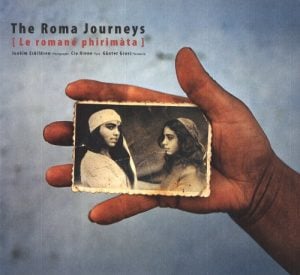 The results of this project, The Roma Journeys, were multiple: music recordings, photographs, texts, exhibitions etc. The book The Roma Journeys was published by Steidl Publishers, with a foreword by Günter Grass, both in English and German. Does your text follow a certain structure or did you have to adapt it from one geographical area to another?

It was indeed a challenge to find a common form for such diverse pieces of reality. Very early in the project we abandoned the idea of trying to make them all fit into one story, so to say, and decided to divide the book into seven chapters according to the countries we travelled through. The situation, the history and the life of the Roma differ so largely depending on the country in which they live, and even within one country, the situations can be very different. So, we focused on one place at a time, putting them under an enlarging glass as it were – we thought a lot of Night on Earth by Jim Jarmusch – and I wrote about the lives and situation of the people we met in that specific place. The texts are in themselves structured quite similarly, I try to give a short documentary account of the people we stayed with and met, their lives, and a historical background of the different groups, as well as an insight into the general situation of the Roma in the respective country these days. In this way, the texts are really quite condensed.

Are there more similarities between Roma populations than differences? What do you think is the future of their culture?

This is a difficult question to answer without the risk of generalization. What you can say they share though is a common historical, cultural and, for those who speak Romani, a common linguistic background. Also, they are a minority in every country they live, and as such, some of them face problems to various degrees. In Romania alone, there are about sixteen different groups with distinct traditional occupations, and four general Romani dialects. There are the Roma who were assimilated during Communism (românizați) and who only speak Romanian, and others who have successfully resisted assimilation attempts throughout history like the căldărari. And then, in every country, there are Roma who have integrated or assimilated completely and are not easily identifiable as Roma, or others who have decided to shed their Roma identity or to hide it because of the discrimination they face as such. We started distinguishing between ‘visible’ and ‘invisible’ Roma, and the Roma which people generally have in mind when speaking about Roma are merely the visible ones. When it comes to culture, there can be significant differences too. Many traditions have simply evolved according to circumstance, and the Roma have generally lived in their respective country for over 500 years, so their culture has adapted accordingly as has their language, and very often, the religion of the region has been adapted too. So, certain rituals of the Greek Roma have more in common with Greek Orthodox traditions than let’s say the ones of Finnish Kaale, but on the other hand, there are identical superstitions in Northern India where the Roma originated and among the Roma in Finland, so it is all rather complex, and again, not easy to answer questions without the risk of simplifying terribly.

It is difficult for me to say anything about the future of Roma culture. When looking at the past, one can easily feel that it is almost a miracle that the Roma still exist. Of course, there has been a symbiotic relationship between the peasants and the itinerant Roma too, on whose goods and services the peasants were dependent on as were many armies. However, apart from the first century in Europe when the Roma – or the dukes and pilgrims as they were perceived and consequently presented themselves – were welcome, European legislation towards the Roma has been a long sequence of inventive attempts at expulsing, criminalizing, enslaving, assimilating or exterminating them; they were outlaws in Hungarian lands, slaves in Moldavia and Walachia, rounded up in Spain, and the persecutions reached their peak during the Second World War when numerous Roma were deported and killed in European concentration camps. Research and literature on Roma history has been very limited, often misleading, and until a few decades ago information on the Roma has mainly been in the hands of non-Roma. This, fortunately, is changing. There have been attempts of Roma self-organization earlier, as for in Romania in the 1930s when Roma organizations and newspapers were founded, but their progress was interrupted by Romania’s alliance with the Nazi Germany. In the past two decades, the initiatives have been many, but the situation is fragile. Roma cultural or other activism in Hungary has become increasingly difficult, and in Russia it has become entirely illegal, with NGOs having been declared foreign agents. Still, there are so many Roma activists, scholars, artists, filmmakers, writers, lawyers and journalists who are doing immense work for their communities and for Roma culture, and also collaborate transnationally. There are many people shaping the general awareness about Roma, contributing to a necessary change of attitude. Witnessing their work one cannot but be optimistic.