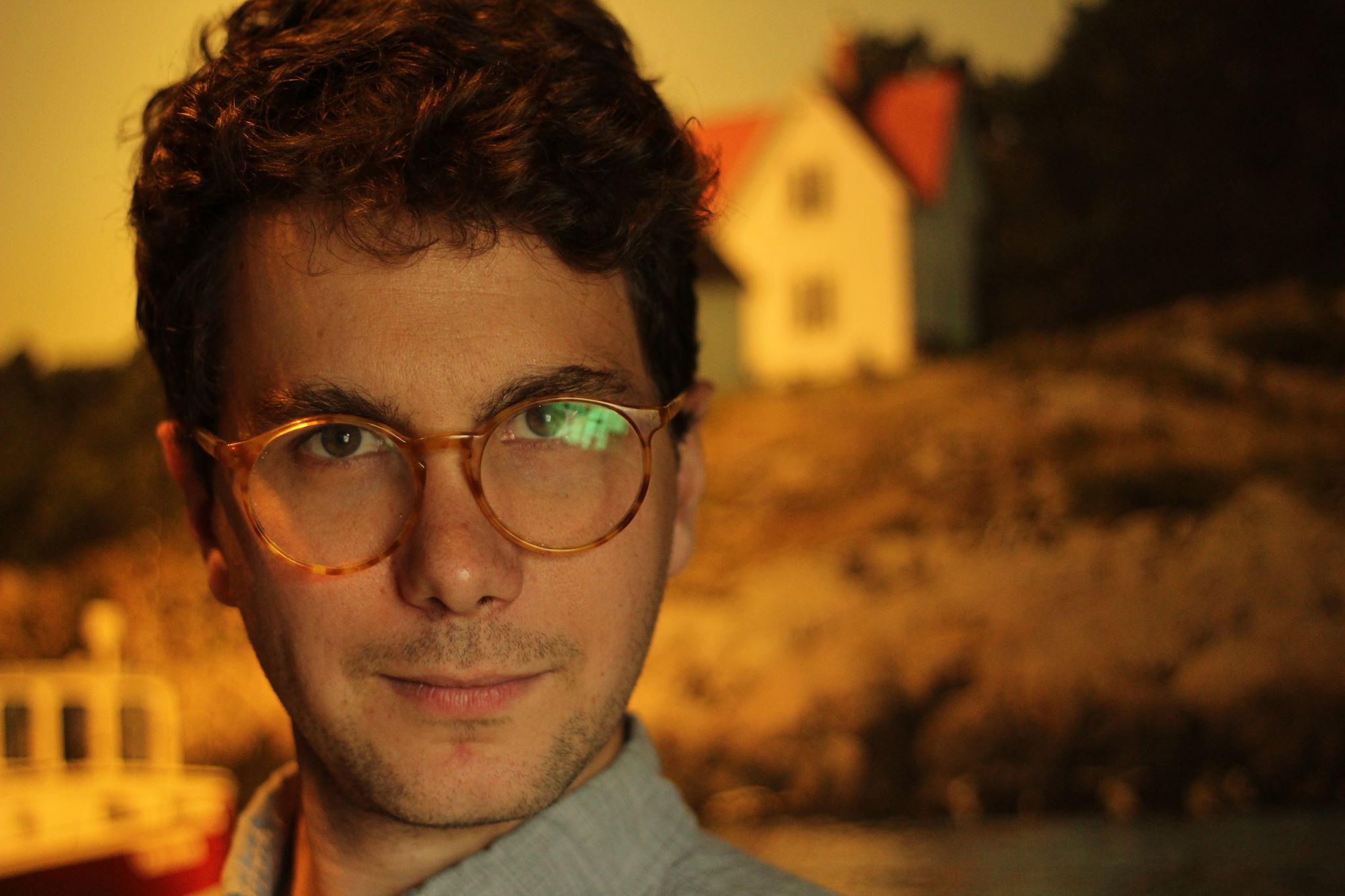 Toby Altman is the author of Arcadia, Indiana (Plays Inverse, 2017) and five chapbooks, including recently Security Theater (Present Tense Pamphlets, 2016). His poems can be found in Crazyhorse, Jubilat, Lana Turner, and other journals and anthologies. 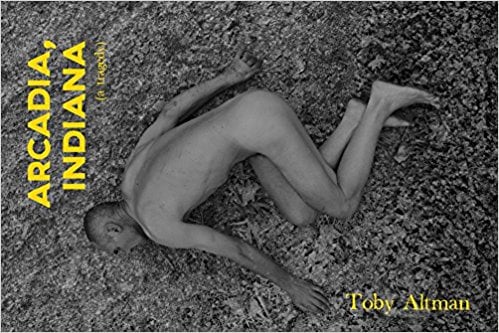 Dissidence through an excess of harmony

The world presented in this volume (Arcadia, Indiana (Plays Inverse, 2017) has reached its own meaning and its limits. Nowadays, the unreal can frighten us: the characters are not touching each other, they don’t interact in a usual way, but through the meanings of a strange language. Sense organs or wounds are generic ones, the communication among elements and mankind have reached another stage. If we look around us, what are the first signs that make us realize the world in this volume is our world?

I spy with my little eye abandoned gas stations and capsized SUVs, the dusky, shaved, seductive flank of a roadside McDonalds (and within it, a lather of meat, tincture of antibiotic and gasoline). I spy with my little eye pink flowers washed in cellular data and fragrant with exhaust, a matron’s touch on the median of the highway. I spy coke ash that ferments in the river and mercury-heavy sturgeon that feed at the bottom, slurping up the muck, dense emptiness everywhere.


The people living in a corporative, business world “caress each other in the abstract parts of their blubber using an antiseptic idiom”. Do they know the tragedy they are living? Or is this a corporate pleasure, to which we need to adapt no matter what?

Now that corporations are persons, we need to begin thinking seriously about what their pleasures might be. How—and what—does a corporation desire? This play attempts to do just that: to imagine a tragedy written by a corporate AI for the collective body of a corporate board. What do they want to see played out on the stage? What you see is what they want: they want to luxuriate in a world in which only capital has meaning, in which all other systems of signs and value are sclerotic, impossible, or simply pointless. Including, of course, the poetry that tries to map their world.


Do the characters have a vision of their own lives? Or any options to be different from the mass-world?

I think of tragedy as a kind of historical arthritis. It sticks in the joints of our culture or, rather, it makes them stick—a hardness, calcification, that limits motion, possibility. But if tragedy is the problem, it can also be the cure (or so Aristotle teaches): its bloody weather providing a measure of respite, a vision (even if only in the negative) of a different world, and a relief to the accumulated sediment and moods that clog the pores and doorways of our body. So that manly men dissolve into hot otherness: wrapped in lace, loose, liquid, a sensitive, flexible gel.


There is also a character called Toby, who makes an “ode to himself”, who penetrates several antique tragedies and some soda and sandwich juke-boxes, just to prove his manhood. The character thinks he has “an inalienable right to soda and sandwich – that this is what it means to be a man”. For his own grandeur, he will pay with his own life: first by credit card, then with his own life. Given this situation, what would the afterlife look like?

A vineyard full of feral pigs. A coastal city drenched in Antarctic swill. A lapsed insurance policy. A shattered power line. The bodies of immigrants and prisoners in orange jump suits. They are building a fluted border fence in the heavy sun, 120 degrees in the shade. At night, they lie in their bunks and watch a movie about a beautiful white girl who lives on a Christmas tree farm. She goes to Nashville to become a country singer, but on the way she is liberated from her body and flies away, a pale silver spirit, the size of a quarter. She hovers over the prison, translucent, luminous, powered by a cheap, sustainable source of domestic energy, singing sweetly to the prisoners: a world is what a world might be.

This is a play full of autonomous discourses, fountains of language that bend and circulate without belonging to any particular character. No distinctive styles, no apt fit between the body and the speech: instead, this play presents a world in which language travels on its own energy and initiative, invading the bodies of the players and infecting them with tragic gravity, bawdy pleasures, puns, finger-sized tumors that sweat in the heat of the stage-lights.

Here’s an idea that I cherish against all reason: the idea that the poem can be a dissident organ, that it can shatter the historical boundaries of the present to make meaningful contact with the past. Why bother with the past? Because only the police are absolutely modern. Because the new requires the grain and resistance of the old. Because capital, to secure its dominance, has tried to ruthlessly suppress the old. What if the poem could bring it back, even in micro-doses? How the day is deranged: a cup of coffee with Utopia hiding inside it.


Arcadia implies a premonition, it is connected to technology and to a hybrid DNA, it is visionary. The present of this volume can be today but also in many years…

Dark as it is, this tragedy also suggests how light and loose the future might be. Imagine, for instance, a world in which the automobile has been abolished (cars are dumb). Imagine a world in which gayness was mandatory: citizens would be required to engage in homosexual experiments rather than, say, serve in the army or go to college. Imagine in a world from which gender (and genre) have silently withdrawn and bodies float in luminous constellations that melt and dissipate even as they form. Each of these worlds we could call Arcadia. Not my Arcadia: they are germinal Arcadias that linger in the heart of my book’s dark vision. They are its possibility, its vision, its answer.


Supposing that Arcadia is the syntax of today’s language, and that “poetry makes nothing delicious”, can we talk about pleasure during the death of a language?


“The body is the frame which sets the word to work in things”. What would meaning look like, without a bodily filter?

I’m wondering about the word “look” in your question: isn’t the eye a theoretical globe, the organ that frames and filters? Note that in the Renaissance, people thought that the eye emitted invisible beams that extended from it to touch (caress) the things it sees—that seeing consisted precisely in this act of caressing. Note how much less embodied our own understanding of sight is: sight does not entail reciprocity. I can see without being seen (viz: Vertigo). If I touch something, it also touches me. Maybe a more embodied kind of meaning would be modelled on touch and its reciprocal pleasures: imagine, for example, a text that transforms when it comes into contact with the body of its reader. Lying on a coffee table, for example, it looks like any other book; when you pick it up to read it, its words scatter or turn pink; its spine splits, revealing a reservoir of candy in the book’s binding; etc.


“The language is a frail ballot, / a glass of milk without the glass.” Would we be able to find its origins nowadays? Does it matter?

Poetry is not a search for language’s origins but for its present. In a text like Arcadia, Indiana—a text which is almost criminally dense—I try to play with or upon the entirety of my language, to show its fissures and then to run my fingers across them. (Without engaging in the kind of ventriloquism, ok, minstrelsy, that has afflicted similar efforts: say Berryman’s Dream Songs). Conclusion: the instrument of language is both multifarious and highly constrained. All its notes harmonize with capital. What can a poet do? This poet tries to produce dissidence through an excess of harmony, as it were: so much language all singing the same tune that the music resolves into cacophony.