Mamle Kabu, a writer of Ghanaian and German parentage, was born and raised in Ghana and completed her education in the United Kingdom, graduating from the University of Cambridge with a BA, MA and MPhil. She returned to Ghana in 1992 where she has since been resident and works in social development. Her short stories have been published in various anthologies and journals in Africa, the UK and the US. One of these, “The End of Skill,” was nominated for the Caine Prize in 2009. In 2011, she won the Burt Award for African Literature for her young adult novel “The Kaya-Girl,” published under the name Mamle Wolo. In 2014, her story “Flying through Water” was shortlisted for the Golden Baobab award for children’s writing. Mamle spent the latter half of 2014 as a resident writer on the University of Iowa’s International Writing Program fall residency and then at the City of Asylum, Pittsburgh. She has also written poetry, two screenplays and is working on a novel. 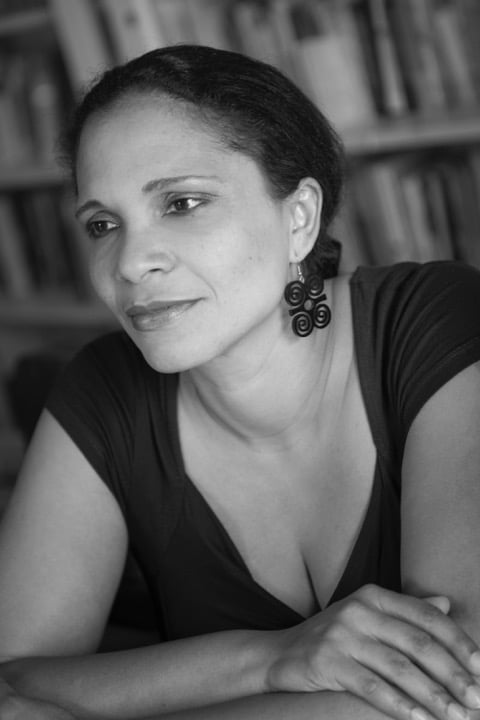 Between the sobs came the flashbacks.

“You’re crazy, I was talking to my sister.”

“Anyway what d’you expect? I mean you’ve just let yourself go, don’t give a shit anymore, so why should I?”

“She means nothing to me I tell you. Please…”

With each flashback came more tears. They welled up from the open wound and stained the tissues scarlet. One after another, the bloodstained tissues fell to the floor, forming a bright red heap. The floodgates had burst at last and there was no stopping the torrent. It roared forth furiously, obliterating all in its path. Yet, with its explosion came blessed relief, release, it was almost delicious. She could not imagine, did not want it to end. Her eyes smarted and she could hardly breathe, but she wanted to surrender to it, sink into oblivion.

If only her mind would stop playing back the whole episode and allow her to drown quietly. But the emotions were fighting for supremacy. Hurt was overtaken by Rage, which was swallowed up by Jealousy, which succumbed to Hatred, which plummeted into Despair. They whirled around, blended into one another, pulled apart and started the vicious dance over again. In the middle of the circle, Love, bruised and battered by the others, rose again stubbornly after each assault. It was the crescendo of this dance that had broken the floodgates.

Before the dance had begun, the emotions had been welded together in a knot around her heart that froze her to the bed, chilling her to the marrow. Her fingers and toes were cold and her whole body was clenched into a fist. That was before she had confronted him. She lay there rigid, nauseated by the taste of metal in her mouth, knowing she would never sleep in that icy clutch. She would lie there all night, eyes staring into the darkness, endlessly playing back the whisper into the phone, “Last night was wonderful…”

Now the knot was loose and her heart could beat again. But it throbbed out of time and with each beat the blood bubbled up, erupted in spasms and the scarlet heap grew. “I want the truth,” she had screamed. But it came with a knife in her heart. The dance of the emotions continued to the dissonant beat of a mangled heart, the pump and spurt of blood tears.

Why did she feel this mindless hatred against the other woman? He was the traitor. But the poison flooding her soul was for the stranger. For her very existence, her womanhood. For everything she didn’t know and would never know about her. And for all that had been contaminated by her, right here in her own home. The treacherous phone carrying sweet nothings to her ear. The faithless chair he was lounging in when she caught him making love to her on the phone. She could have ripped them apart.

The viciousness of hate shocked and overpowered her. But mingled with it was an odd fascination that dreaded its own fulfillment. What was special about her? How did she look? What was her name? No, she didn’t want to know. She must never find out because whatever it was, she would never again be able to hear it without feeling sick and cold. How could this stranger, without even knowing her, destroy her world, take what was hers? Didn’t she have any compassion, any conscience? But if he didn’t, why should she? Why couldn’t she hate him, the most contaminated of all? How could, why should love survive the ruthless dance of the emotions?

She heard his step at the door. Traitor. So if the baby had not woken her up at that moment, she would never have known. He thought she was safely asleep. Now he had finally come, hadn’t avoided her as he usually did when she became ‘emotional.’ She was surprised he had the courage. Now he would come and ask something inane, like “Are you OK?”

He looked at the pile of sodden tissues beside the bed. Then he put his hand gently on her shoulder.

He hesitated as she made no reply. She reached for another tissue and blew her nose. He patted her shoulder awkwardly and waited expectantly, but her shoulders shook as the sobs started building up again.

“Why are you still crying?” he asked.

He swallowed hard. The emotions were still swirling around the room, tugging at his own, to join in the dance.

“I never meant to hurt you.”

“No, but you didn’t care enough not to.”

“I’ll make it up to you,” he whispered and left the room, fleeing his own emotions, trying to leave them behind, tangled up in the crazy dance.

The blood welled up again. At least he had showed he cared. And she knew he cared more than he could ever show. She knew that later on when they could talk about it more calmly, he would tell her he would never risk losing her again. That he couldn’t live without her. Not in so many words but that was how she would know he meant it. He would beg her forgiveness. She could decide what to do. The emotions would make the call when their dance had played itself out. But all that would be later.

So why couldn’t she stop crying now? Because the wound was still bleeding. Blood doesn’t stop flowing just because you say sorry. It has its own time. She surrendered to the flood. Let it wash her pain away. Engulf the swirling emotions and float them away. For now, at least. Rage, Hatred, Jealousy, Despair, Love battered and bruised… ebbing, swirling, drifting away, for now, for now. The release was luxurious. She drifted into sleep.

She woke up an hour later. She could not remember falling asleep or having any dreams. It was as if she had been carried unconsciously to another time. But the bleeding had stopped. She felt a soothing stillness. The first delicate membrane had formed over the wound.